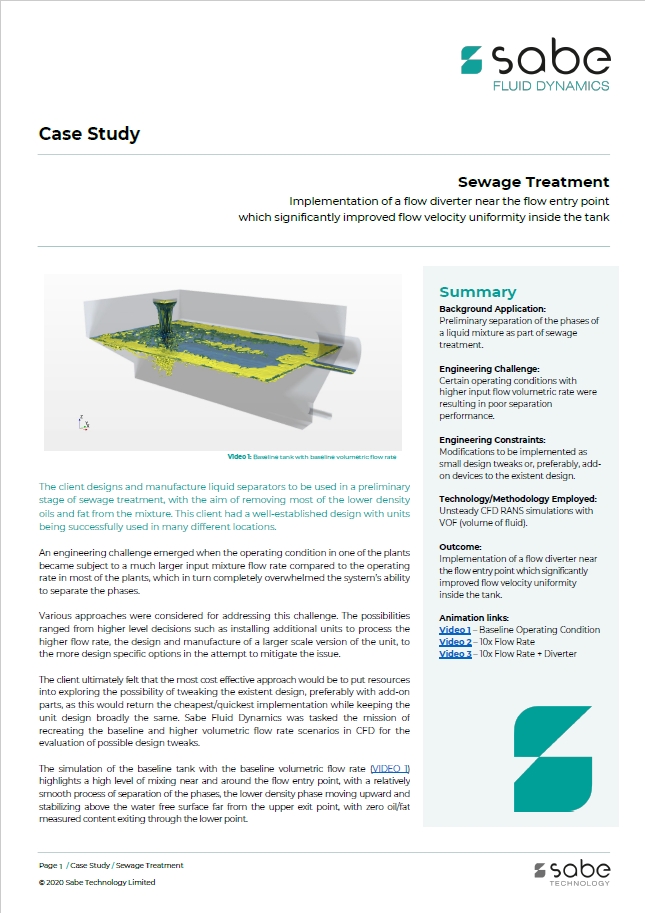 Preliminary separation of the phases of a liquid mixture as part of sewage treatment.

Modiﬁcations to be implemented as small design tweaks or, preferably, add-on devices to the existent design.

Implementation of a ﬂow diverter near the ﬂow entry point which signiﬁcantly improved ﬂow velocity uniformity inside the tank.

The client designs and manufacture liquid separators to be used in a preliminary stage of sewage treatment, with the aim of removing most of the lower density oils and fat from the mixture. This client had a well established design with units being successfully used in many different locations.

An engineering challenge emerged when the operating condition in one of the plants became subject to a much larger input mixture ﬂow rate compared to the operating rate in most of the plants, which in turn completely overwhelmed the system’s ability to separate the phases.

Various approaches were considered for addressing this challenge. The possibilities ranged from higher level decisions such as installing additional units to process the higher ﬂow rate, the design and manufacture of a larger scale version of the unit, to the more design speciﬁc options in the attempt to mitigate the issue.

The client ultimately felt that the most cost effective approach would be to put resources into exploring the possibility of tweaking the existent design, preferably with add-on parts, as this would return the cheapest/quickest implementation while keeping the unit design broadly the same. Sabe Fluid Dynamics was tasked the mission of recreating the baseline and higher volumetric ﬂow rate scenarios in CFD for the evaluation of possible design tweaks

The simulation of the baseline tank with the baseline volumetric ﬂow rate (VIDEO 1) highlights a high   level of mixing near and around the ﬂow entry point, with a relatively smooth process of separation of   the phases, the lower density phase moving upward and stabilizing above the water free surface far   from the upper exit point, with zero oil/fat measured content exiting through the lower point. 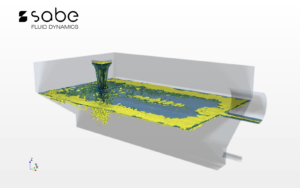 The simulation of the baseline tank with the baseline volumetric ﬂow rate (VIDEO 1) highlights a high   level of mixing near and around the ﬂow entry point, with a relatively smooth process of separation of   the phases, the lower density phase moving upward and stabilizing above the water free surface far   from the upper exit point, with zero oil/fat measured content exiting through the lower point. 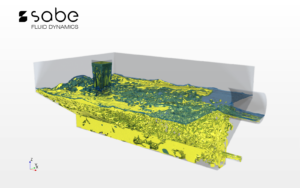 In contrast, the simulation of the higher volumetric ﬂow rate (VIDEO 2) shows the development of a   strong longitudinal ﬂow component in the lower part of the twhich in turn drives a high level of fat  content toward the lower exit.

In many cases, however, the effective residence time in certain areas of the domain can be smaller than the average residence time. In other words, non-uniformities in the ﬂow velocity ﬁeld within the tank could result in large amounts of the mixture reaching the exit point very quickly. In these scenarios, design modiﬁcations are often able generate performance gains by improving the ﬂow uniformity.

Within this challenge, it was clear that the dominant longitudinal ﬂow was responsible for a lot of mixing and a very small residence time for a signiﬁcant fraction of the mixture. A few design modiﬁcation options were considered for the attempt to suppress this strong longitudinal component and the implementation of a ﬂow diverter under the ﬂow entry point was chosen by the client as per image. 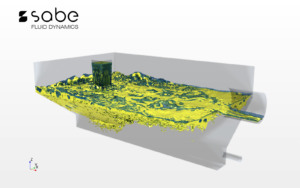 The objective of the diverter was to redirect the inlet vertical ﬂow momentum towards the side walls near the entry point. The simulation of the updated conﬁguration (VIDEO 3) shows a large increase in   the ﬂow momentum dissipation around the ﬂow entry point with a signiﬁcant increase in the overall   mixing as a consequence, however the previously dominant longitudinal ﬂow component was  successfully suppressed.

As a result, a much-improved level of ﬂow velocity uniformity was measured downstream the diverter which in turn returned a reduced deviation of the ﬂow residence time relative to the average. The  design change successfully directed all the measured lower density phase towards the upper exit. Furthermore, the add-on diverter was relatively cheap and quick to be installed with little effect on the background operation activities such as cleaning and maintenance.

Sabe Fluid Dynamics is able to support our clients with multiphase flow simulations, contact us to discuss your challenge! 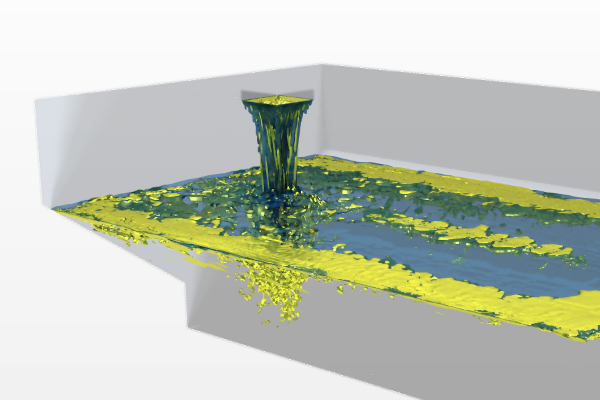 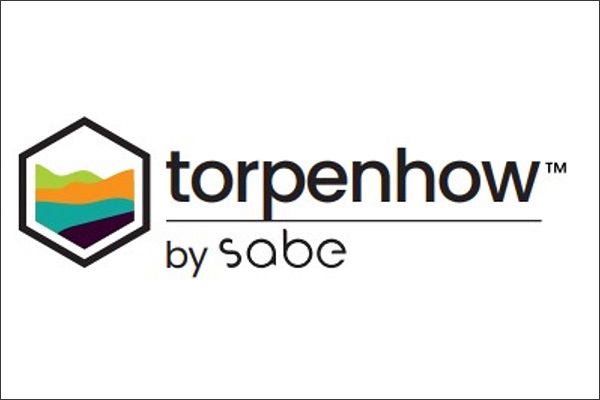 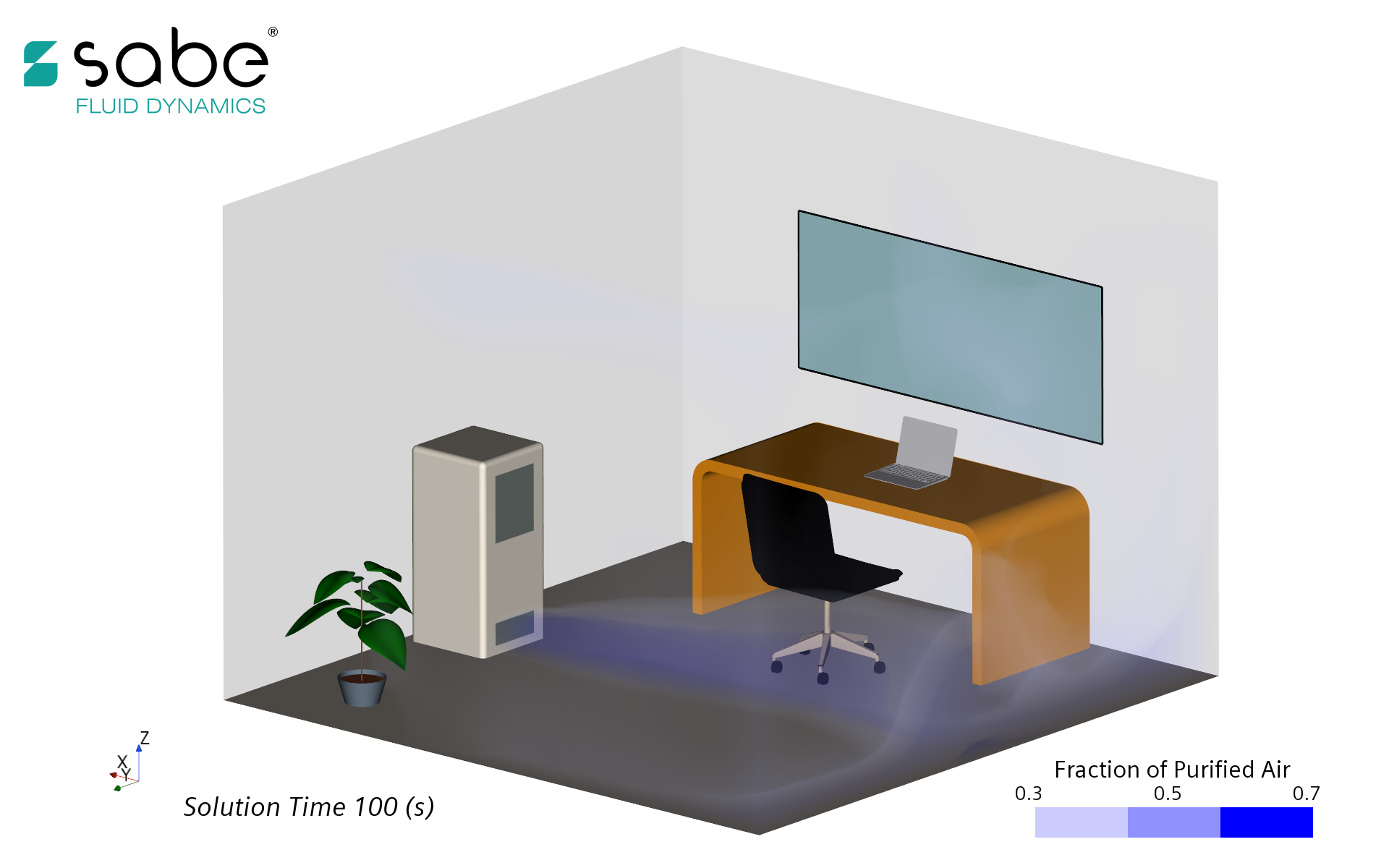 Air Purification in a Room

Background Application: Air purification inside a room. Engineering Challenge: Investigation of the effect of the air purifier position and operation conditions with the objective of minimising regions with low air circulation. Technology and Value Proposition: Sabe...
Read More 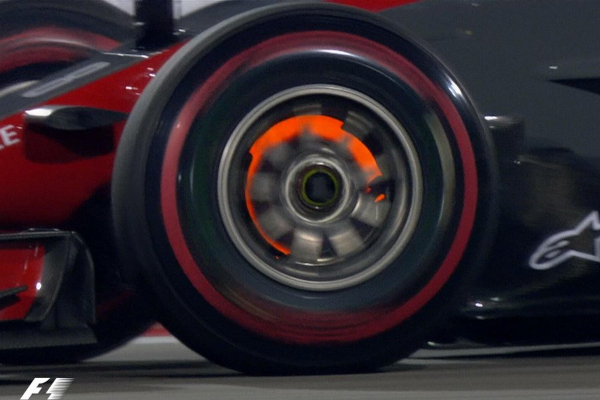 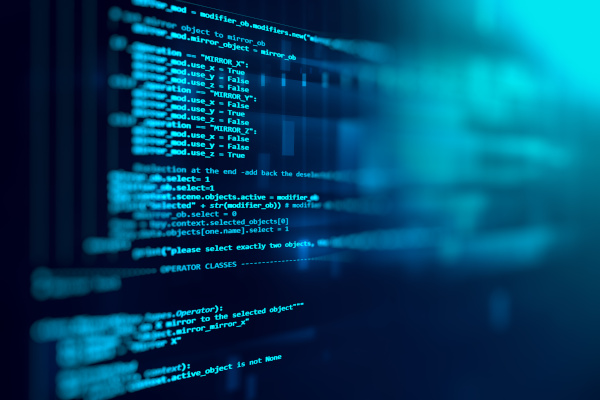 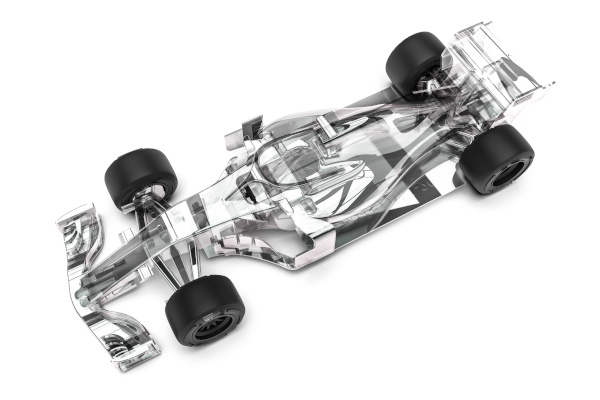 Background Application: Aerodynamic development and performance/correlation analysis of road and racing cars. Engineering Challenge: Judging how to deploy different development tools and methods in complementary manner, making best of use of the strengths of each...
Read More
Contact us to discuss your requirements